Most shows premiering this season have aired at least six episodes, striking the halfway mark. So far, this has been an incredible season in terms of anime (especially for yuri fans!) To navigate all of the possible shows for fans to choose from, I decided to make this list based on the shows I am watching and discuss which anime to consider. 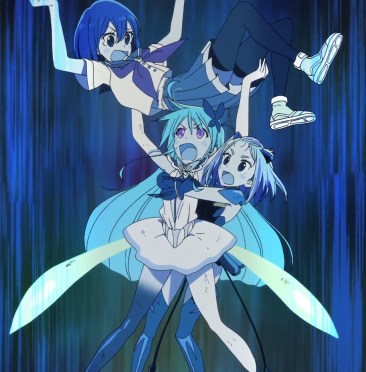 I admit that at first I was lost when watching Flip Flappers. The story launched into a parallel world with practically no explanations and even more unanswered questions. However, I continued to watch it and am glad I did so. What seems ridiculous and nonsensical on the surface is actually very deep and compelling. As it continues, the writing, art, and symbolism in the show gets increasingly impressive. I was so amazed by Episode 6 and its message that I jumped on my laptop right away to write an analysis about the metaphors it used. I cannot recommend this show enough. It might be too abstract for some people, but give it a chance, and look up some theories and explanations if you need to. It’s worth it. Also, for you yuri fans out there, this anime is golden.

Other Shows Worth Watching-

Although Flip Flappers takes the cake thus far, there are many other great shows to watch this season, including…

I have two sides to my personality: the side that loves cute things, and the sides that love dark, gloomy concepts. Magical Girl Raising Project combines these two things. Anime with magical girls are usually very cute and lighthearted. Not this show. The premise is about magical girls needing to fight each other in order to stay alive. What starts out as a dream come true for many girls and women quickly turns into a twisted, psychological bloodbath. And I love it. If you are a fan of Madoka Magica  or like seeing the darker side of magical girls, I highly recommend this anime.

From what I have seen on Twitter, a lot of people are hating on this show. It may not be perfect, but I have been impressed with the anime so far. It takes place in an alternate version of World War II, which alone makes it fascinating. Some people have complained that the show is boring, but I don’t think so. The political talks are sometimes a little prolonged, but discussing military strategies and planning a country’s actions go along with war. You can’t have one without the other. I personally like to see the perspective of a small country facing the threat of the Germans. On top of its obvious military themes, the show includes magic and witchcraft, which are two more bonuses, at least in my book. .

I have seen many people complaining about the fan service in this show. An article on Anime Feminist did an excellent job of explaining why the fan service is problematic. Despite this, the fan service doesn’t bother me that much. It is necessary? Of course not. But I think it is just a minor flaw in an otherwise very strong anime. The fan service moments are meant to be comical; they are not to be taken seriously- therefore, I won’t.

I also need to point out the obvious yuri themes in this show. I love Izetta and Fine. Their relationship is built on mutual trust, and feels authentic. Together, I think they will bring their country to victory and also help each other grow as people. 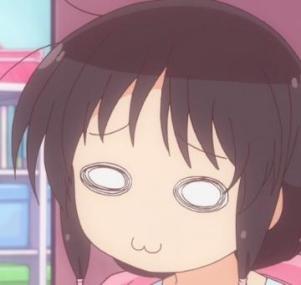 This is the kind of stuff I live for- moe girls just going through their lives doing cute things. Other than being cute, the characters in this show are very relatable and funny. The socially awkward club president and writer remind me of myself, the fujoshi reminds me of my friend, and the other characters are just plain adorable. I cannot help but smile as I watch their interactions. I also like how the theme of the show is doujin (self-published) games. Watching their hard work inspires me as someone who wants their fan-made work to be published and recognized one day. 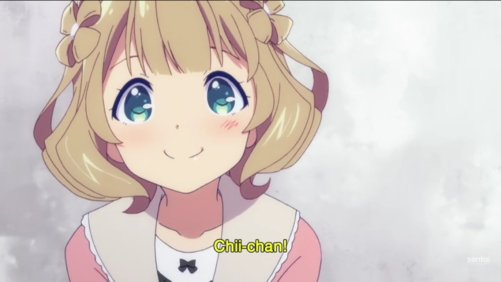 I love this show so far. As I mentioned in a past post, I like to watch anime that involves adults and working life. This anime gives us insight into the life of Chitose, an up and coming seiyuu (voice actress). She has dreams of grandeur and wants to be famous, but things don’t go as planned. The anime company she is working for is completely unorganized, and Chitose’s cynical attitude does more harm than it does good. This is a very unique anime- I highly recommend it for anyone who is looking for something different or wants to take a look into how the anime industry sometimes works behind scenes. 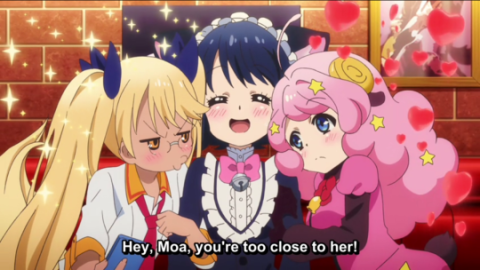 This season is just as insane and ridiculous as the first one. It’s wonderful. If you are looking for a strong story, look elsewhere. However, if you want to laugh and have a lot of WTF moments, watch this show. The characters are hilarious, lovable, and memorable. SHINGANCRIMONZ are priceless.The music in the show is catchy and appeals to all kinds of genres. On top of this, the art is unique, with a lot of adorable, chibi moments and some not-so-cute moments. Overall, it is an extremely fun show and I cannot stress how great it is.

I admit that the first episode of this show was awful. I think the writers were trying to find the right elements during the first episode and kind of fell on their faces. I saw a lot of negative blog posts and reviews where the writer said to drop the show. I considered dropping it myself, but I decided to keep watching because I like the concept of the show. Instead of a magical girl, the main character is an “exorcist girl” who uses the power of a god to fight evil. As someone who is interested in spirits and Eastern religions, I had to see where the show was heading. And it has gotten better. The elements that didn’t worked have either been removed or tweaked. The fan service has lessened and the story has strengthened, as have the characters. Some of the concepts of the show are very interesting and the comedy as gotten stronger. Yuma saves this show. She constantly cracks me up.

I recommend watching this show if you want a different take on magical girls that will make you laugh. Just try to grin and bear it through the first episode or two!

I began watching this show when I saw its art. The colorful, cute, and unique style reminds me of Lucky Star, which is one of my favorite anime of all time. There were rumors of potential yuri and I also thought that it might be a sports anime that I could actually be interested in. However, I was pretty disappointed from the beginning. My biggest complaint is the characters. While they are all very cute on the outside, I feel that the characters lack depth. They each have some kind of personality quirk, but many of these seemed forced and made some of the characters one-dimensional in my opinion. The anime does attempt to make the characters experience some growth, but it felt lacking- probably because the characters are not very deep to begin with. There are some yuri undertones in the show, but these felt stale with the characters being so shallow.

I wasn’t crazy about the story as well; it was typical. The main character, Agari, is full of herself until she finds a rival, Koyori, at table tennis, someone who is just as talented as she is. She practices to get better and continuously challenges Koyori, but has a mutual respect for her. Eventually, she and her team want to make it to nationals. It is a story we have all heard a thousand times and the anime doesn’t provide anything to make it unique or different. Also, certain parts and scenes are redundant. The ping pong games drag on, but this is expected. What I am referring to are the two main characters. Agari will repeat constantly how she wants to be adored and be seen as star. Koyori is always cheering how she wants to make her heart beat with excitement as she plays. It would be acceptable if these phrases were repeated occasionally, but they sometimes come up multiple times per episode, to the point where I want to yell, “OKAY, I GET IT ALREADY!”

Another thing that really bothered me was the fan service. I can deal with some fan service when it is appropriate; however, it just didn’t fit into this show’s art style. As I said, the art is very cute and Lucky Star-ish. Very innocent, cartoonish, and almost childish in a good way. Because of this, the art and fan service clash. Having cutesy, cartoonish girls with big breasts and dripping wet t-shirts seems like an oxymoron.

I don’t want to make it seem like a terrible show. There were parts and characters that I enjoyed. However, it just didn’t seem worth watching with all of the other great shows that are airing this season. That being said, I may go back later to finish it. But for now, I am putting my attention elsewhere.

Shows I Have Fallen Behind On- Hibike! Euphonium and Long Riders!

It must sound like blasphemy for a yuri fan to put Hibike! Euphonium on the side. However! I didn’t fall behind because the show is inadequate. In fact, it is quite the opposite. For the first season of Hibike, I ended up marathoning the whole thing in one day because I just couldn’t stop watching. Because of this, it feels weird watching the episodes separately, so I decided to bingewatch the whole thing once every episode has premiered. From what I have seen so far, the show is fantastic. I am just waiting to be able to absorb all of its glory and yuri in one sitting like last time. It will be worth it.

Long Riders! seems to be behind all of the other anime this season. Most shows have aired at least six or seven episodes, whereas Long Riders! has only premiered four or five so far (at least to my knowledge). And unless I am imagining it, the updates between episodes seem to be longer than one week. I want to continue the anime, but the slow updates have made me put it to the side for now. I will probably end up watching it at the end of the season because I liked what I saw so far. Plus, I find it interesting considering I can’t ride a bike ;_;

If I get a chance, whenever that may be, I will try to write reviews or posts on these two shows!

What are your thoughts on these shows? Do you agree or disagree? What has been your favorite show this season and what do you recommend for me to watch? Discuss below!

6 thoughts on “Half Way Through Fall 2016- What To Watch, Drop, and Give A Second Chance”