It is is pride month! :3 And for pride month, the blogger group OWLS (Otaku Warriors For Liberty And Self Respect) which I am a part of has decided to celebrate LGBT characters in anime and manga. Here is our prompt for this month:

So for the “Team” topic, we will be discussing our favorite LGBT & Queer characters in anime and other pop culture related media, the impact of the yaoi and yuri genre within LGBT & Queer communities, our personal stories involving gender/sexual orientation, and etc.

Because I am a huge fan of yuri (two girls in love), I wanted to talk about the genre for this post. There is a theme in anime and manga (even outside of the yuri genre) I have noticed lately when it comes to lesbian relationships: they aren’t considered real. 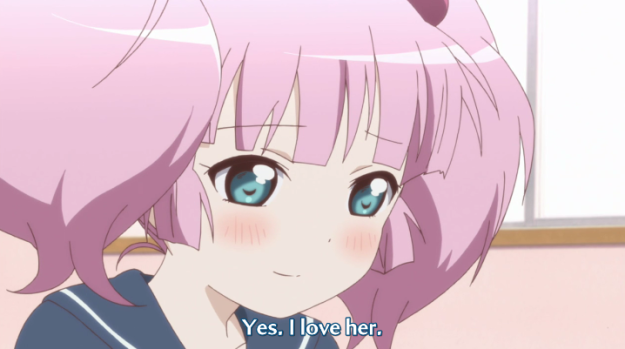 Problems With Lesbian Relationships In Japan

Japan has very strict gender roles and traditions, which I wrote about in my Yuri! On Ice piece back in February. Japanese culture emphasizes family- women are expected to have children, take care of them, and raise a family. This is a pretty normal belief for most societies, but nowadays many women may pursue other goals and many people respect that. But in Japan, where social pressure and conformity rule (you read more about this is my graduate paper), going against the gender role of women is considered improper. For example, a while back I remember an incident that happened where a Japanese assembly woman was giving a speech. One of the men in the audience ridiculed her in front of everyone, saying things like “Why don’t you get married? Why don’t you have babies?” This is terrible. At the same time, though, this incident created a huge backlash and people were very upset. On top of this, Shinzo Abe is trying to implement new laws to help women in the workplace. This shows that things are slowly changing in Japan, and yuri manga may help to accelerate the change even more.

However, because of strict gender roles, lesbian relationships aren’t always acknowledged in Japan. Two women being together goes against traditional roles. Two women can’t have children. Two women being together is “different.” The list could go on indefinitely. As I said, I’ve noticed these beliefs showing up in anime and manga. I can’t tell you how many times I have seen the words “But you are both girls…” There is also the problem of two females liking each other, but never actually getting together (the curse of the whole yuri community). I can’t tell you how many times I have seen this, even in some of my favorite series. I think the creators are afraid to acknowledge that two girls can actually like each other.

The key visual for the Cirtus anime adaption coming out soon.

Even with these two shows, there is still a lack of yuri anime. If you want to see girls that actually have meaningful relationships with one another, you are going to have to read yuri manga. Many series, known and unknown, show girls in real relationships. There have been some great yuri manga recently been published in English (bless Seven Seas Entertainment!), and even though they show legitimate lesbian relationships, they too hint at some of stereotypes that exist in Japanese society.

Examples Of Negative Stereotypes In Yuri

First, I am going to talk about Netsuzou Trap.  Warning: spoilers! This manga is about a girl named Yuma who finds herself ensnared in a web of cheating and deceit. When she starts dating a boy, her friend Hotaru begins to come on to her. She kisses her and does other sexual things to her. Hotaru claims that they are just “practicing” for when Yuma and her boyfriend get intimate. Except… Yuma and her boyfriend never end up getting intimate, while Yuma and Hotaru continue to play around and “practice.” When Hotaru finally confronts Yuma and says that she is a cheater, Yuma is confused. How is she cheating? And with whom? Obviously, she is cheating on her boyfriend with Hotaru. However, this didn’t even occur to her. They were just “playing around” and it “didn’t mean anything.” But it evidently did. This shows that Yuma didn’t even consider their relationship real in the first place (at least in the beginning).

Netsuzou recently premiered in July. Below is a screenshot further showing these themes. 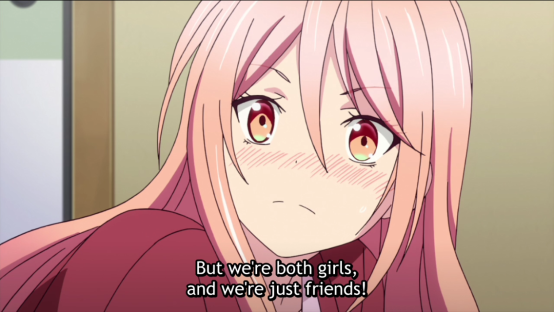 In many manga by Milk Morinaga (who is arguably the greatest yuri mangaka of all time), these themes show up as well. In the recent manga series, Secret of The Princess (THIS IS, LIKE, MY ULTIMATE FAVORITE. GO READ IT.), two girls begin dating. But they aren’t dating because they like each other. It’s because the one girl, Miu, wants to date her senpai as a favor. Miu wants to be a princess and wants to be “a perfect bride.” Therefore, the two girls relationship is practice for when Miu gets “a real boyfriend.” As they date and get closer, Miu begins to develop feelings for her senpai, but denies it because “it isn’t a real relationship.”

This scenario is something I have seen so many times in yuri manga. One girl gets her heart broken because the relationship was never real, apparently. Or they were just going through some kind of phase.

Other times, girls won’t even admit they like another girl because of the social pressure.  In Hana and Hina, also by Milk Morinaga, one of the main characters Hina falls for her friend Hana. At first, Hina doesn’t really think much about the implications of this. She likes Hana because she finds her adorable and sweet. But when Hina starts talking to some classmates about hugging and kissing other girls, they say that two girls being together is “freaky.” From there, Hina goes through an episode of gay angst, fighting with her own identity.

Note: If you have been harassed about or are struggling with your sexuality and this has caused you to experience anxiety or other mental health problems, please seek professional help from a service like BetterHelp.

I could literally talk about examples forever (I’ve read way too much yuri manga). These themes exist in almost every yuri manga in some form, even if it is subtle. For example, in Kase-san and Asagao, Yamada is constantly thinking, “But we are both girls!” Some other popular yuri manga that have been published in English with similar themes are Bloom Into You (GO READ THIS) and Kiss & White Lily For My Dearest Girl. I would have liked to have gone into more depth about these, but I already rambled too much about the other manga.

One other theme I would like to discuss is marriage. I have read many yuri manga where there will be two girls in love, but one (or sometimes both) have an arranged marriage. Although the girls love each other, one of them usually feels pressured to go through with the marriage and leaves their true love behind. In Flower of My Heart by Kurokiri Misao (her work is wonderful, please read it), a grandmother tells the story of her and her female lover when they were young. Although they wanted to be together, both of them ended up getting married to men and leading separate lives.

All of the examples mentioned so far have been negative, showing how strong gender roles and stereotypes are in Japanese society. At the same time, however, all of the manga I discussed have good qualities. All of them validate lesbian relationships in some way. Netsuzou Trap is a twisting labyrinth of a story so who knows what will happen in the end… but Yuma does begin to realize her that her feelings for Hotaru are legitimate. In Secret Of The Princess, Miu also realizes that her feelings are real. She gives up trying to be a princess with a perfect prince, and is happy to have her own princess. Hina admits that she is in love with Hana. The grandmother in Flower of My Heart supports her granddaughter’s own lesbian relationship. All of the other manga I briefly mentioned have positive themes as well.

More and more yuri manga has been published lately and hopefully it will continue. You will notice that most of the series I mentioned are only in manga form. If these series are turned into anime, it could really help many girls struggling with their sexuality and other LBGT issues. Citrus and Netsuzou Trap getting anime adaptions is a huge step. Although I do like these two series, they can be pretty ecchi… So, my hope is that some of the more innocent series will be made into anime as well, so yuri won’t be seen as just fan service. Kase-san and Asagao did get a short video, but a full anime adaption is definitely needed.

Watch the Kase-san and Asagao video below!

Even if you aren’t the biggest yuri fan, please do what you can to help promote yuri series. If you are a yuri fan and are not familiar with the series I mentioned, GO CHECK THEM OUT RIGHT NOW! Because getting more yuri manga published and more anime adaptions will help spread the idea that lesbian relationships are valid.

An extended Kase-San OVA, a full Happy Sugar Life anime, and a full Bloom Into You anime have been announced! 🙂