Hello everyone! Another month has passed and there is a new OWLS (Otaku Warriors For Liberty And Self Respect) blog tour going on. Every month the members of OWLS discuss a particular topic in anime, manga, and other kinds of pop culture. This month, our topic is mirrors:

“Magic mirror, on the wall—who is the fairest one of all?”

When we look in the mirror, what do we see? Do we see ourselves or someone we don’t want to be? For this month’s theme, we will be exploring some of our favorite anime and other pop culture media that redefine individual beauty—inside and out. Some topics we may explore are physical appearances, social expectations on gender, and the importance of self-confidence.

I admit I had difficulty thinking of a topic at first. There are so many anime that deal with characters’ different self identities. OWLS has already given me the chance to write about chuunibyou characters, characters with anxiety, and lesbian characters and their yuri relationships. What else could I possibly write about?

Then, it hit me. I thought of an anime I have been wanting to write about for years. One of my all time favorites. Elfen Lied.

If you haven’t heard of this anime, it is infamous. The story is dark, twisted, and disturbing… there are gratuitous amounts of gore… as well as a lot of nudity. The first five minutes of the anime literally consist of a naked woman slaughtering people.

I am not trying to scare you away, though. Beneath all of the mature-rated mayhem, this anime has a very deep message, one that has stuck with me for years. It is about accepting yourself, accepting your inner demons, accepting your past, and accepting the dark nature of humanity. There is also a message of forgiveness.

If you have not seen this anime, this post is going to contain many spoilers. I also want to point out that this is based only on the anime’s story. While they begin the same way, the anime and manga end very differently, with the manga continuing the story and changing the characters’ fates. I personally like the anime more because the message is a little stronger. As a side note, this is going to be much darker than my usual posts.

One more thing. The main character has three different names. Let me explain them here so you don’t get mixed up later.

Kaede– The name the character was given at birth

Lucy– The name give to her by researchers

Nyuu– The name of her new, separate personality

The little ears on her head are actually mutant horns

I am going to start from the beginning of the main character’s life. Lucy is a small orphan girl. She has no idea who her parents are, and she is brought up in an orphanage. This alone is a terrible experience for many, but, to make things even worse, she is bullied by the other children. One day, Lucy finds a lost puppy and secretly takes care of it. When the bullies find out, the start to harass the puppy to the point where it dies. As you can imagine, Lucy lost it. However, her reaction may not be what you expect.

Before this incident, Lucy had glimpses of something growing inside her, some kind of unknown power. When the other children killed the dog, her power is unleashed. It is the power to psychically tear things apart. Anything. She can cut through metal and other solid objects. This makes killing people… well, easy. In that moment of despair, she accidentally(?) kills the children with her new power.

After this, Kaede runs away from the orphanage, unsure of what to do with herself. She is obviously scared and confused. What was happening to her? What was this power? What was the voice she heard in her head? She doesn’t know it at the time, but Lucy is a mutant. A new species whose purpose is to eliminate the human race. This gene – this desire – is sleeping within her. Even without this thing festering inside her, she feels alienated and hated by humans. She feels like she doesn’t belong. The evil “voice” feeds on these emotions.

Note: If you are hearing voices, have violent urges or are suffering from anxiety and depression like Lucy, please seek professional help. Violence is never the answer.

The mummy girl represents her “evil” side

To survive, Kaede kills people so she can have access to shelter and food. She starts doing it so often that she feels as though she is abandoning her humanity altogether.

Then, she meets Kouta, a young human boy around her age. The two become friends and Kaede begins to feel as though maybe she can be accepted for who she is. She starts to push away the voice and desire inside her, so she can live a normal life.

But life never works that way.

One night, Kaede and Kouta plan to meet up at a bon festival. Kaede is extremely excited, but becomes upset and jealous when she sees Kouta with another girl (who is actually just his cousin). On top of this, some of the people at the festival are rude to her.

Kaede snaps. She has had enough of humans and their cruelty. She gives in to the evil voice residing in her.

She literally goes on a killing spree, murdering innocenr people at the festival (isn’t this such a nice anime?). But it isn’t enough. She feels betrayed by Kouta, the one human that was kind to her. In her rage, she also does something unspeakably horrible (as if the other stuff wasn’t enough). She purposely murders Kouta’s family.

After this incident, Kaede is captured by a government agency that is researching her mysterious power. The scientists rename her “Lucy” because she is the first of many mutants. It turns out that she isn’t the only mutant who is going around killing humans. From here, the story jumps forward a couple of years. Kaede/Lucy has been locked down in a research facility this whole time. Meanwhile, Kouta is living a seemingly normal life, except for one thing. He cannot remember parts of his past. He has no memory of how his family actually died. He also doesn’t remember Kaede. The memory was too painful for this psyche to bear, so his brain erased the memories.

But this wasn’t mean to last long.

One day, Kaede/Lucy escapes from the research facility (killing everyone along the way). During her escape, she is shot in the head by a security guard. She survives, but the damage is done. Her personality splits. Gone is the murderous, vengeful mutant. She is now a helpless girl who can barely talk or function.

This new version of her doesn’t even know what a clock is.

Normally, you would assume that this is probably the result of the bullet affecting her brain, but I think it goes deeper than that. Lucy is now in the outside world for the first time in years. This is the place where all of those painful memories happened. The place where she was almost accepted. The place where she met Kouta. Instead of dealing with all of these traumatic memories, her mind decides to split. She is now an oblivious, innocent girl who has no idea about the outside world or how unfair it can be. A girl that can maybe be with Kouta. (Of course, this naive version of herself has no inkling about any of this.)

Note: If you are experiencing trauma or a break from reality, please seek professional help. These can be serious medical conditions.

And fate be it! Kouta finds this new version of Kaede. But of course, they do not recognize each other. Being the kind person that he is, Kouta decides to take Kaede in and names her Nyuu. (All of these names are so confusing, I am sorry). And now being the oblivious version of herself, Nyuu follows Kouta because she has no idea what is going on.

In her new home, Nyuu makes all kinds of friends. She has many fun experiences. She feels accepted. However, her past catches up with her. The research facility tries to find her and bring her back. She interacts with other mutants. Slowly, her other self comes back. Sometimes, she is able to switch between her naive personality (Nyuu) and her old, murderous self (Kaede/Lucy). The previous version of herself (Kaede/Lucy) recognizes Kouta, but is unable to face him. She does not want to admit that she murdered his family and caused him so much suffering. Whenever Kouta almost finds out her true identity, she switches back to the oblivious personality (Nyuu) because she can’t bring herself to face him.

Kouta, on the other, starts to remember his past as well. All of the crazy events that happen (and all of the bloodshed) jog his memory. He too, however, is unable to come to terms with his past at first. Whenever the memories poke their head out, he subconsciously pushes them back down.

At the end of the series, the two of them finally come together. Kouta realizes who Lucy really is and remember the time he spent with her in his past. He also remembers what she did to his family. Alternatively, Kaede/Lucy finally admits who she is and admits that she is a murderer.

In this moment, both of them are finally admitting who they really are on the inside. Kaede/Lucy is a mutant with the power and drive to kill the human race. She is also the reason for her dear friend’s suffering; the culprit of a horrendous crime (as well as many others). Kouta also realizes his true past. His family didn’t die in a car crash. They were murdered by his friend, the little girl he thought he could trust. 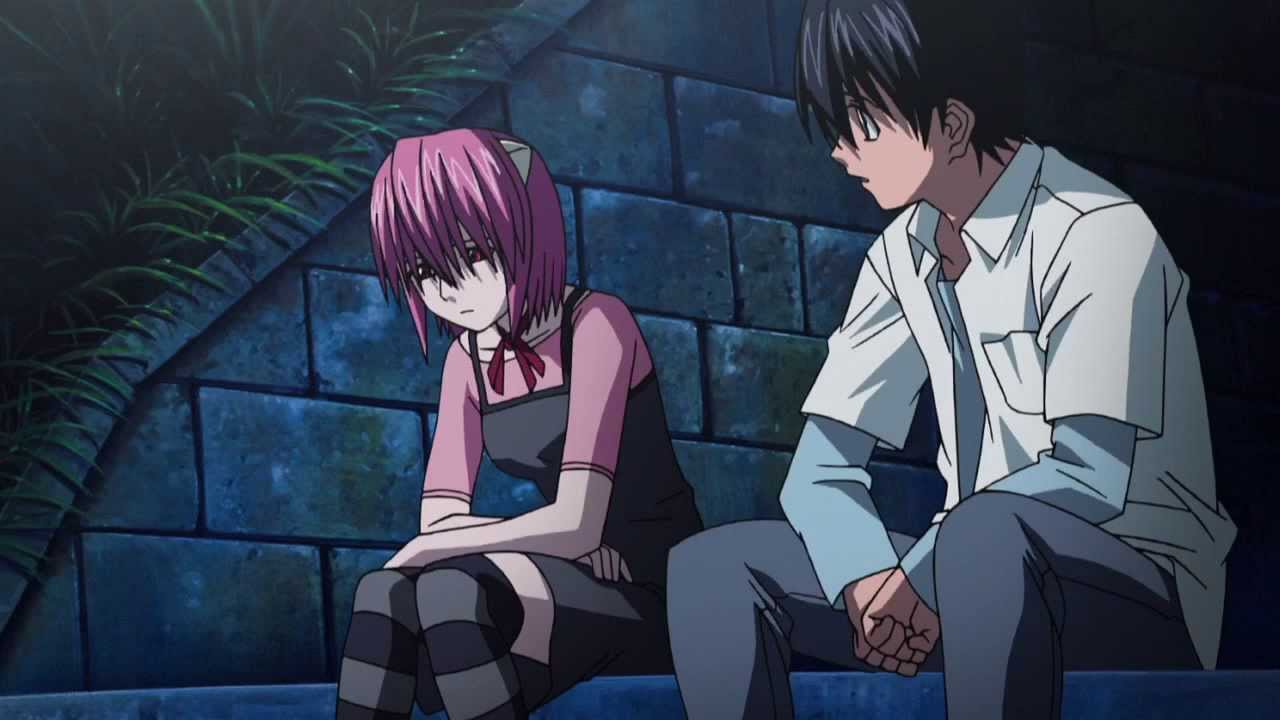 And yet… They accept one another. Despite what she did to his family, Kouta tries to forgive Kaede/Lucy. She is special to him; they have a connection they cannot deny. The memories he had with Kaede are some of his finest, even with their eventual outcome. And Lucy finally accepts what Kouta means to her. Their time together was also her fondest memory. He makes her feel like she belongs, even though she is a “blight” on humanity.

Because of this, she decides to thank him. To atone for her mistakes, Kaede/Lucy sacrifices herself so that Kouta can live.

Kouta hugging Kaede, even after knowing the truth

This moment makes me cry every time.

These two characters were able to accept themselves and accept each other, love each other despite everything… It shows that any of us can accept and forgive the most ugly sides of ourselves.

Am I saying that we need to forgive murderers? No, of course not. The circumstances in this anime don’t apply to reality. But holding onto the good parts of yourself- even if they are a tiny speck- can help drive away the bad. Being able to accept your flaws and mistakes will allow you to start making up for them.

This anime is brutal, yet beautiful. If you can get past the gore, nudity, and other disturbing aspects, I highly recommend this show. It is a 10/10 for me, and one of my favorites. I still get chills when I think about it.

15 thoughts on “Elfen Lied- Accepting Every Part Of Yourself, Good and Bad (Owls July Blog Tour)”