I am a huge Love Live fan. It’s an obsession that has literally taken over my life. Tons of merchandise… idol music on my phone… constantly playing the gatcha game… pining over waifus. However, even though I love the LL franchise, the second season of Love Live Sunshine left me feeling a little bittersweet. It was a fun ride, and I still love the show, but I think it was much weaker than the first Love Live series. Please read my review below to find out why, despite my idol obsession, I was disappointed.

The characters in this series get a 10/10. Every single one of them has a unique personality that makes them both lovable and relatable. Great characters have always, in my opinion, been the strongest aspect of the Love Live franchise. A while back, I wrote an entire post analyzing why the characters in the series are so strong. The same elements apply to Sunshine.

The best part of the second season was the individual episodes that developed some of the characters. (The Yohane and Riko episode was my favorite one in the entire series.) I felt that I was able to get much closer to some of the characters, such as Dia who had closed off her true personality for the majority of the first season. The episodes about Ruby were great as well. They showed that she has more to her personality than just her timidness.

At the same time, the characterization was uneven, which Remy discusses in his review of the series. I felt like there were more characters that needed attention. Especially Kanaan. Although she and Mari got an episode focusing on their reconciliation, I felt like I still don’t know much about Kanaan as a person. She barely got any screen time in the first season and not much in this one either.

The characters are really what shine in this anime and they make it worth watching. But I wasn’t happy with the story. This is partly due to my own expectations. As a writer, I knew that the story had to take a different approach than the first series. In other words, the school couldn’t be saved. If the school had been saved, it would have been too similar to the original series. In Sunshine, the school needed to recruit new students in order to stay open. At the very end of the first season, it showed that only one student had applied to the school. I assumed that this meant the school wasn’t going to be salvaged.

In my head, I began to wonder: “How can they make the story different?” I started coming up with different scenarios. The story I came up with was this- at the beginning of the second season, the school would  be closing or would have already closed. The girls would struggle with their identity and question whether they should continue the idol group.

But… this didn’t happen. In the beginning of the second season, the school was still open and girls became all upset when they heard that the school might close.

Now, it isn’t a bad thing that the story took a different route than I thought it would. The creators obviously have their way of interpreting things. But it did affect my enjoyment a little bit. Either way, I knew the school was going to close. It was inevitable from a story point of view and a realistic point of view. This is why I didn’t like the episodes that focused on the girls attempting to save the school (it was mostly Episode 8 I believe). I felt that they could have used that time to focus on other important things like the characterization or… idoling!

A Lack Of Idoling And A Satisfying Ending

Although Love Live always focused on things outside of the girls’ idol career, I expected more idol-related things in the show. We didn’t really get to see Aqours practice a lot. We barely knew anything about their process of making songs, costumes, or choreography.

What irked me the most was the final performance. The performance itself was great. I really enjoyed it. But we saw no preparation. Like, how did they make those skirts that turned into feathers? (It is going to bother me!) How did they have time to prepare everything when they were busy with other things, like the closing school ceremony?

What bothered me the most, however, was how we didn’t see their reaction when they won. Earlier in the season, we saw their reaction when they were placed into the next round. It was emotional and I admit I wanted to cry because I was so proud of them. The performance with Ruby and Saint Snow was also emotional because I saw how much Ruby and the others grew as characters.

But the big moment when they finally won Love Live? Nothing. No emotion. It skips to Chika sitting on the beach with the winning banner.

This did not make me feel satisfied. At all. Especially with all of the build-up in the 11th episode.

What would have made me feel satisfied is seeing all of their emotion- their relief, disbelief, anxiety- when they were given the winning title. Chika asked all of them if they wanted to win Love Live, and they all said yes. But we don’t get to see how they reacted when they actually did win- when that listless dream came true.

I wasn’t satisfied with the very end either. The girls claim they found their radiance, which, of course, is metaphorical. However, I feel like I didn’t get to completely feel their radiance with them. I felt like all of the emotional buildup fell flat. It was nice to see them all sing and dance together, but… it just didn’t hit me emotionally. Something about it was lackluster, in my opinion.

I was also confused. Mostly about the third years. I know they said it was “the last time” they were going to perform together… But I was still confused. Had they delayed their departures to college? Had they changed their minds and wanted to stay? Had they been planning to surprise Chika all along? Was the whole thing about them leaving just a farce? 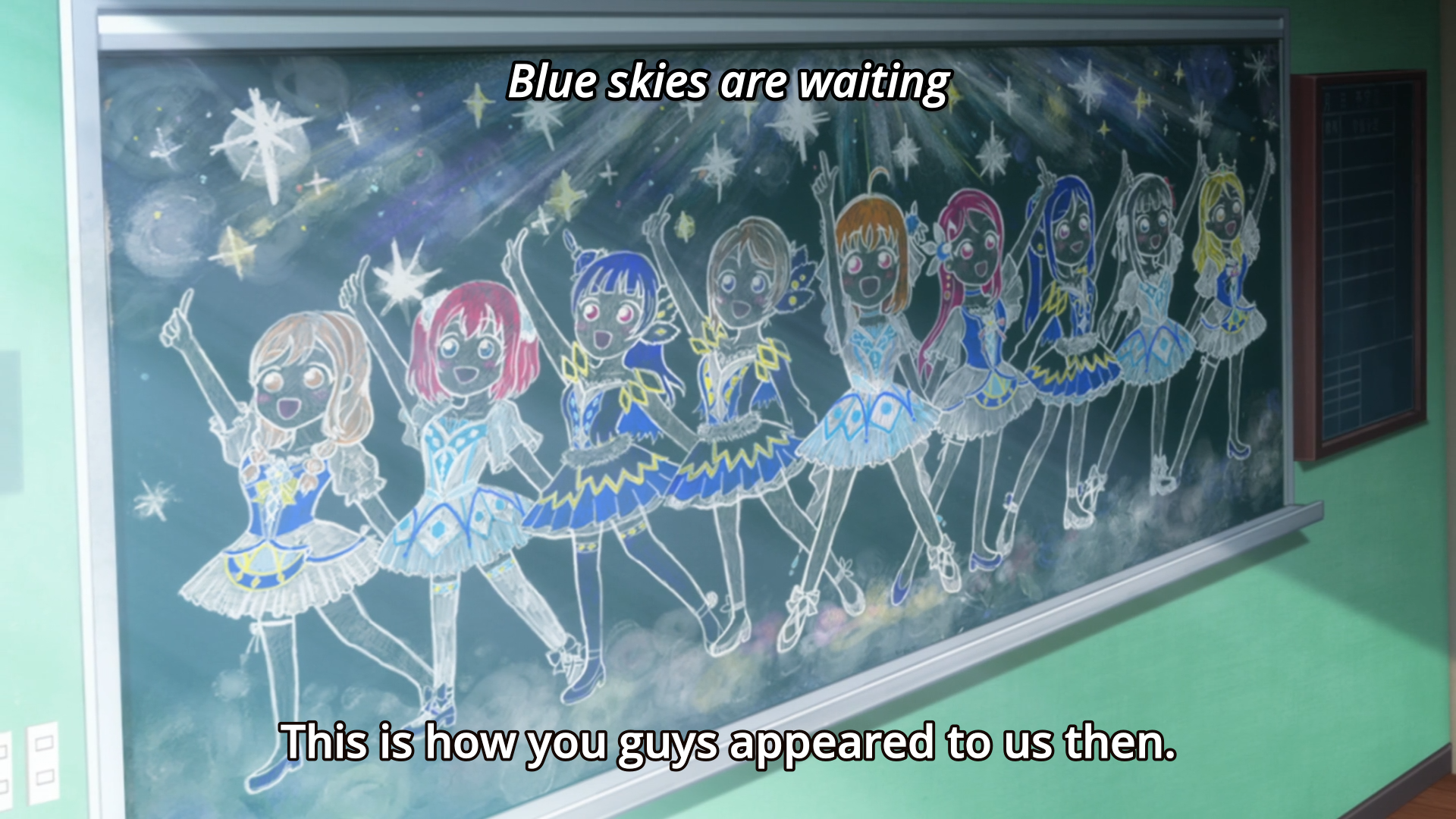 As the curtain closed, my mind was plagued with these questions and I did not feel any closure. Although the end of the first Love Live series was kind of open-ended, it made me feel excited. That wasn’t the case for Sunshine, though.

You know what? Maybe I have to watch the entire anime again. Maybe the anime’s focus isn’t characters growing as people through creating an idol group as I consider the first series to be. Maybe the underlying focus is a bunch of girls desperately trying to save their school (with some idol stuff on the side) and finding their “radiance” that way.  Perhaps if I watch it again with this in mind, I would enjoy the second season more. Maybe my focus was too much on the actual idol aspect.

However, I really don’t want to make it seem like I didn’t enjoy it. Despite the story, I did like it. I got to see more shenanigans of some of my favorite characters of all time. I got introduced to new songs. I saw some great performances and adorable costumes. I just think some of the parts about the school should not have been so drawn out. And I think the ending needed more emotional impact.

Everything in between, though, was fun and I fell even more in love with the girls from Sunshine.

I just hope the movie can help wrap up the story and help everyone feel some closure.