Rai: Hi everyone, NerdyGirl from Nerdy Girl News and I are back with Round 2 of our collab, where we focus on lesser known anime that deserve some attention. In the first collab, we talked about Inuyasha, Shugo Chara and much more. Make sure to go back and read Part 1 if you haven’t. Now… please enjoy our collab!

Speaking of Part 1… NerdyGirl, I loved your top banner in it! I’m a huge fan of Melancholy of Haruhu Suzumiya! In fact, a lot of people were fans back in 2006, but like many other shows, the hype has died down and you barely hear about it anymore ;_;

The Disappearance of Nagato Yuki had the great faces ever.

I also really loved the spin-off anime/manga The Disappearance of Nagato Yuki, which came out in 2015. But no one seems to know anything about it. Are you fan of Haruhi or Yuki? And do you know any more recent series that need some attention?

NerdyGirl: I love Haruhi but haven’t even heard of The Disappearance of Nagato Yuki! I really need to catch up on my anime, haha. I’ll add it to my need to watch list!

Recent series… hmm, I really loved all the attention Angels of Death was getting after they made it from the RPG game. Oh, and Violet Evergarden was released last spring but the hype died down pretty quickly on it. I loved it, but I really need more people to fangirl about it with.

Rai: It’s okay! No one has heard of the Disappearance of Nagato Yuki D: It’s a spin-off where Yuki (from the original series) has emotions. It’s basically The Disappearance of Haruhi Suzumiya movie continued. I think no one knew about it because it was only on Funimation Now and Hulu. I think availability of (or lack of) certain shows on streaming sites have caused some anime to become even more under the radar. But yes, go watch or read it wherever you can! The series and Yuki deserves it ❤

I actually wasn’t too crazy about Angels of Death ^_^; But I only watched the first two episodes, so maybe I can try watching it again. Yeah, I remember everyone going crazy over Violet Evergarden, but then it basically disappeared. It doesn’t help that Netflix stole it. And I heard the story is slow. Is that true, in your opinion?

A recent series I really loved was Magic of Stella (Stell no Mahou). It came out in 2016. But it’s basically nonexistent in the anime community.

NerdyGirl: Yes, Violet Evergarden was a little slow. I almost gave up on it! But I was bored at home and decided to give it a chance. It took about 8 episodes to really get into it and once I got into the episode about Ann and her mother….you’ll be hooked! Well, maybe not hooked but you’ll start to enjoy the episode even more. The OVA special they did for it as well, will have you in tears.

I haven’t seen the Magic of Stella either! Oh goodness, I don’t know if I can even call myself an otaku now, haha.

Did you watch Masamune-Kun’s Revenge? It has a really annoying ending but it’s one of those lesser known anime shows that I actually really liked. Same with Princess Jellyfish. I LOVED it but I only know two other people in the fandom. It’s sad, especially with how good the anime is!

Rai: I actually don’t mind slow series, so I will definitely check it out when I get a chance, which will be… who knows when haha. And huh, interesting. I have never read a fanfiction before watching the actual series. I used to write fanfiction, but I have a ton of unfinished ones ;.;

UGH. Don’t worry, no one has heard of Magic of Stella, except for hardcore CGDCT fans like me. That’s because it was only on the streaming service Daisuki, which no one knew about or used. It actually shut down a while back. But Magic of Stella is sooo good! The art style is unique, the characters are adorable and funny… it has some positive yuri/LGBT vibes. And c’mon, it’s about girls making doujin video games, which is the best thing ever.

Magic of Stella is too cute.

It was added to Crunchyroll recently, so GO WATCH IT 😀 I must spread the word haha.

!!! I really liked Masamune! It was like a little twist on the harem genre – maybe not the most innovative anime ever, but I really enjoyed it. It had really good music and character designs (I have quite a few waifus from that show ;^_^). But overall, I just enjoyed the silly antics of Masamune and everyone else.

I need to create a time machine so I can just stop time and catch up on all the anime I’ve missed, haha. I STILL haven’t seen Cells at Work or My Hero Academia and that’s just wrong… I feel like I fail at being an otaku there!

Masamune was pretty funny. I loved the art style! I can be super picky about the graphics and art style when it comes to watching anime. If I don’t like the art, I don’t usually watch it.

Ooh, I hadn’t heard of that streaming service before. I can’t stand using Crunchyroll though. I don’t know if it’s just me or my computer but I never get good service when I use it. So I stopped pretty early.

Rai: I need a time machine too. I haven’t watched Cells at Work either – it exploded seemingly out of nowhere! My Hero Academia is really amazing – you should definitely watch it when you get a chance 🙂 But don’t feel like a fail otaku. As long as you love anime, that’s all that matters!

I can be the same way with anime art too sometimes. Yeah, Daisuki was a fail :< It had a small selection. I can’t remember what other shows were even on it haha… And Crunchyroll is my main anime-watching platform. It doesn’t work well on my computer, but the phone app and other apps (PS4, smart TV) have greatly improved over the last few years.

Hmm… What other shows need more attention in your opinion? Have you ever heard of Blood+ or Blood-C?

NerdyGirl: I’ve heard of Blood+ but haven’t watched it. Can’t say that I’ve seen much fanart or mentions of it either. It definitely needs some more love!

Rai: OMG, okay, let me rant about Blood+ for a bit. It is soooooo good ;-; It’s about a vampire girl. It came out in 2005 and ran for fifty episodes. The story is great, and I love the main character… but my favorite is the music. THE MUSIC. It has a beautiful orchestral soundtrack. 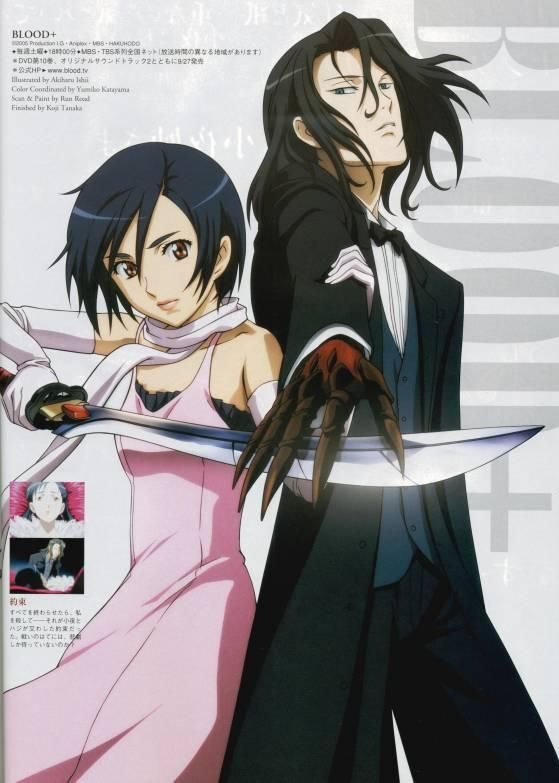 Saya and Hagi from Blood+

I think Blood+ has a little bit of a following, but Blood-C, the sequel spinoff from 2011, is even more unknown. It’s very different from Blood+, which I think turned a lot of fans off (not that there were a ton to begin with). It is also incredibly violent- so violent, it aired censored in Japan, which I don’t think happens very often.

The censorship is actually really bad, which probably turned away even more people. And the ending is confusing if you don’t pay close attention to the story throughout the show. BUT, it’s actually another amazing show. There are tons of nuances throughout the story; it was done very cleverly. It also has a beautiful soundtrack with really intense violins and drums. If you can look past some of the flaws (bad censorship, etc), it’s a really amazing show that needs more attention.

Wow, I really I rambled on about the Blood series… ^_^;

NerdyGirl: Oh goodness, 50 episodes?? It’s so rare for that to happen nowadays. Most anime shows are barely 12. Despite the warnings, I might have to try it! It sounds good so I’ll least try the first episode and see if I can watch. There was only ever one anime that I only could watch 5 minutes of and nothing more. And that was Aho Girl. I know it’s a comedy but my brain cells…oh my glob. It was awful. I do NOT recommend that one. But if it has an awesome soundtrack, I might stick with it. I’m a sucker for those!

Rai: Yes, Blood+ was 50 episodes. Nowadays, only newer, popular anime get a lot of episodes. Blood-C is newer and was only 12 episodes – that’s the one that’s very gorey. Blood+ isn’t that bad in terms of violence. But they are both awesome and need some loving~ I never watched Aho Girl but it doesn’t sound like something I would like .-.

And… that’s everything for now! But Part 3 will be coming soon and we will have a lot more suggestions, especially from NerdyGirl 🙂 Make sure to check back in a couple weeks for a link to it.

Below is a list of all the anime and manga that we discussed and suggested in this post. Be sure to check them out~

The Melancholy of Haruhi Suzimiya

The Disappearance of a Yagato Yuki

And remember, don’t forget to read Part 1 for even more recommendations 😀