Just in time for Halloween, I watched a horror movie that’s not quite like anything I’ve ever seen before. The film is Violence Voyager, an animated Japanese film directed by Ujicha. And oh boy. Where do I even begin?

I’ll start out by saying… Violence Voyager was weird. Downright bizarre. But that’s okay because I like weird. This film pulls you in, makes you highly uncomfortable with the bizarre nightmare it creates, has you question humanity, and leaves you with unresolved questions. However, at the same time, the movie’s uniqueness makes it a very interesting viewing experience.

Author’s Note: A big thank you to Darkcoast for providing a review copy.

An Unusual and Harsh Story

The movie’s plot follows two teenage boys: Bobby, an American boy living in Japan, and Akkun, his close friend. On the last day of summer, they decide to climb a nearby mountain to visit a friend in a neighboring village. Along the way, they come across a theme park called Violence Voyager. At the park, you can shoot fake robots with water guns, which interested Bobby and Akkun. However, once they’ve made some progress in the game, they realize things aren’t as they seem. Both boys get plunged into an ordeal neither of them saw coming, a hellish reality where the robots are real and a crazy man is kidnapping children and turning them into monsters.

This story is not for the faint of heart. Although the movie is Unrated, it definitely falls in the R or 18+ category. As its name suggests, this movie is very violent and gory. On top of that, it’s disturbing. There’s body horror, child nudity, brutal murders, and a whole slew of other strange things.

You can get a sense of the weirdness from the official trailer below. But just a warning: even the trailer has some grotesque images and concepts.

I don’t write about it all that much on here, but I am a big fan of horror. Some of my favorite anime or Japanese movies include Elfen Lied, Blood-C, Parasyte, and Tag. It takes a lot for fiction to scare me. While it didn’t have me completely shaking in my boots, Violence Voyager was eerie enough to make me feel unnerved, which is impressive.

The whole movie gives off a creepy vibe and the subject matter strengthens it more. The idea of humans being modified or mutated into monsters is always unsettling because it makes you wonder “What if that happened to me?” Unfortunately, we only have one body and if it gets ruined… Well, there isn’t much we can do. It’s a haunting idea; the children’s strange new bodies and appearance (as seen in the poster above) still linger in my head.

To put it bluntly, if you are squeamish or easily disturbed by violence and body horror, I would steer clear of this film.

Next, I want to talk about the movie’s rare animation style. It’s called “gekimation” and uses hand-painted paper cut-outs that are moved by hand. They’re essentially paper puppets, and according to Cartoon Brew, the director created and painted the puppets himself. Although Uchida is not the first to ever to implement this animation style, I respect his decision. The process seems very intricate. The creators even implemented real liquid (like water guns spraying water) that made certain moments more realistic yet more odd at the same time. 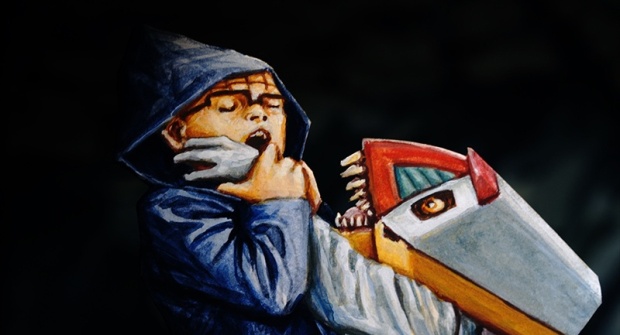 However, the characters can’t perform intricate movements due to the gekimation art style. They don’t even move their mouths when they talk. Because of this, some of the transitions between scenes or certain moments felt awkward or abrupt. Initially, the animation is a little off-putting, but once you get used to it, it adds to the overall surrealism of the film. Violence Voyager wouldn’t be the same without it.

Although I was intrigued by the techniques they used, I do have one complaint, though it’s more about the art than the animation itself. Overall, the art was good, but the characters always had peculiar expressions. For example, instead of smiling when they were happy, they’d have their mouths open in a state of shock. Perhaps some parts were lost in translation (I watched the dubbed version) which is why things didn’t match up. Still, these moments didn’t work well and left me confused.

Other times, characters would just have weird expressions for no reason, such as the boy who had his tongue sticking out the whole time. I imagine that weird expressions were done on purpose because they complement the movie’s outlandish vibe and presentation. But it wasn’t very aesthetically pleasing to someone like me who loves cutesy art.

Is There Any Meaning?

With so much insanity and gore happening throughout the movie, it might be easy to miss Violence Voyager’s underlying meaning. However, I think it does have a message: how far humans are willing to go for the ones they care about.

The whole adventure started when Bobby and Akkun were willing to disregard everyone’s warnings about climbing the mountain because they really wanted to visit their friend Takaaki.

Then there’s Mr. Kioke, the owner of the amusement park, who lost his humanity in an attempt to reconnect with his son Takeshi. Not only did he bring back his son back from the dead, he went to extreme measures to keep him alive, mutating and murdering other children in order to do so. He was so blinded by his love for his son that he didn’t even care that he was taking other parents’ kids away.

Additionally, when Bobby coincidentally found him in the theme park, Takaaki had already become a monster. However, Takaaki was willing to give up his own life to help save his girlfriend and Bobby. And when Bobby himself was captured and transformed into a monster, he did everything he could to save his dear friend in return.

During the final scene of the film, Bobby, despite being horribly deformed and injured, used all of his strength to go home and place flowers in a vase for his mother, who was dreadfully worried about him. In the end, I believe Violence Voyager is telling us that love can make humans capable of doing both amazing and terrible things.

Normally I like to give media I’ve reviewed some kind of number score. But that’s not possible with Violence Voyager. It’s just too out there to rank properly. It’s hard to gauge and compare it other movies when it’s like nothing I’ve seen before.

Like I mentioned earlier, you should avoid this movie if you are easily disturbed. However, if you want to watch something different, see a unique animation style, or experience something scary on Halloween, Violence Voyager is worth checking out.

You can stream the English dub, localized by Darkcoast, on Amazon, DirecTV, FlixFling, Vimeo on Demand, Vudu, FANDANGO and AT&T.

Here are some other blogger friends who also did reviews on Violence Voyager 😛 It looks like Darkcoast contacted a lot of different anibloggers. Anyway, check out their posts because it was really interesting to see their different perspectives.

Have a good Halloween and until next time~

13 thoughts on “Japanese Horror Film Violence Voyager Is Really Out There: A Reflection” 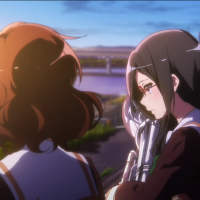